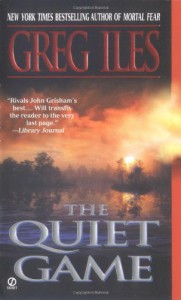 So I am not really sure just who turned me on to the Penn Cage series by Greg Iles. If I did, I would give them a huge hug, because this series has turned out to be pretty amazing.

The Quiet Game is the first book in the Penn Cage series and of course, I read it after I read the second book, The Turning Angel. Reading it second is probably why I didn't give it five stars as I was comparing it to the second book. If you haven't started this series yet, please read this one first. Don't read the books out-of-order as it really spoils them.

The book is really, really raw. Penn Cage returns to his home town after the death of his wife to find out that his father is being blackmailed over a decades old mistake. It all revolves around the 1968 unsolved car bombing and murder of a member of Natchez's black community. As you can imagine, there was a fair bit of racial tension at the time of the murder, and now that Penn is digging into the case, the tension ratchets up once again. It seems that most people in the town know something, but aren't willing to talk for whatever reason.

The case does get solved in the end, but it doesn't have the same resolution as one would suspect of a civil rights era murder case. Added to that, Penn doesn't investigate the case as a lawyer, even though he is a former prosecutor. He investigates it for both moral and personal reasons and it is refreshing to see a character struggle with his decision and trying to balance his need to help his father and his wish to protect his daughter at all costs.

*Warning* Like most books that deal with civil rights era issues, the language in the book is strong and has definitely reflects the atmosphere of the situation.
My Rating